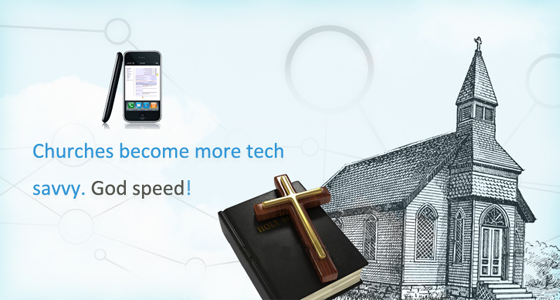 Holy tweets, downloadable Bible and Christian Scripture apps! Well, God has always found a way to communicate with his followers. There was a time when going to church and listening to church sermons, was de rigueur. But now the word of God is just a click away.

Guess who is the most followed thought leader?

The head of Germany’s Catholic church Robert Zollitsch was in the news, this time last year for his famous comment on Jesus being on Facebook. “Fundamentally all media are suited to bring the word of God to the people. Jesus would certainly be on Facebook and Twitter” he told the German paper, The Local.

Where the twains meet!

Technology and religion have never been mentioned in the same breath before. With churches, blessing the pets of patrons through Twitter, and having Facebook accounts, technology has seeped it ways into ancient church walls. Some churches go a step further and use 3D technology and augmented reality to share God’s word.

Buzzplant a digital advertising agency found that about 30% of churches update their Facebook pages every day.

Pope Benedict XVI a strong advocate of social media advised priests to blog. And when the Pope says something, the whole world listens. Most churches transcribe church sermons and share them via social networking sites and blogs. It takes audio sermons out of the walls of the church and helps millions of people download and share sermons.

Have a busy Sunday?

No worries. You are not going to be branded as unreligious. An increasing number of people are stowing away their Sunday suits and turning to apps. Though it is a poor substitute to the old world beauty and charm of tolling bells, high ceilinged churches and a sense of community. It should do in today’s time crunched world.